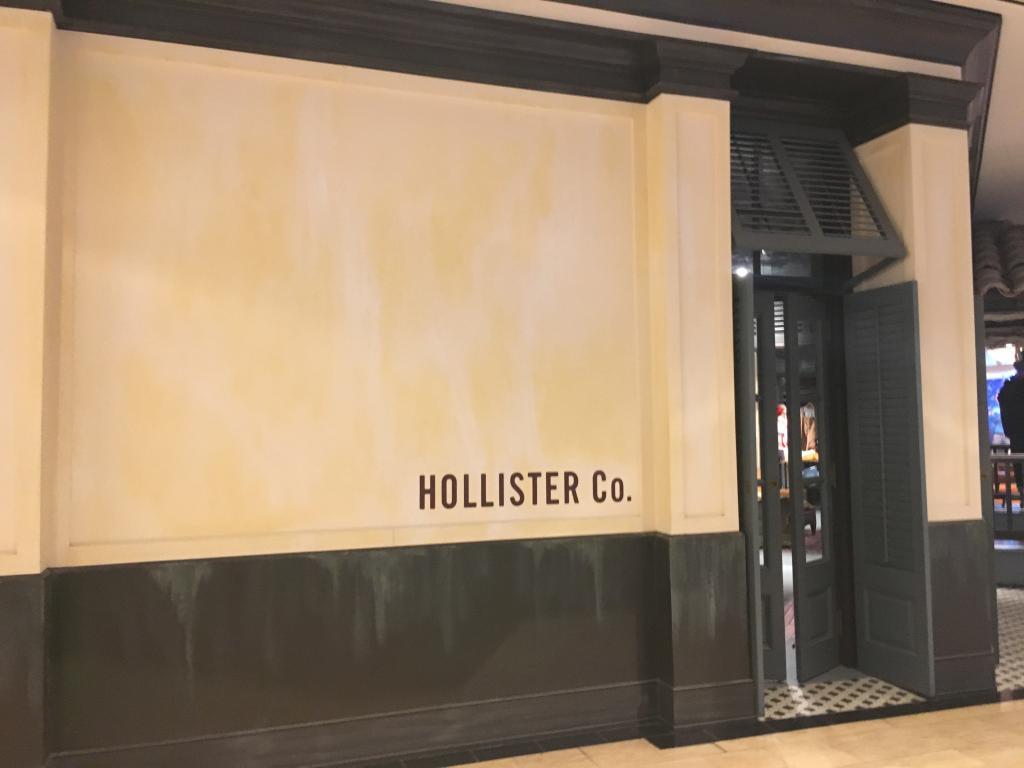 If you google, “Hollister History” it’s pretty funny what comes up. There are several sites that talk about the “fake” Hollister history backstory Hollister made up.

The “fake” history that Hollister apparently tells its employees in new-employee orientation is the following:

There once was a man named John M. Hollister born at the end of the 19th century and loved to play and surf in Maine when he was a kid.

In 1915 he graduated Yale and instead of following a societally accepted path he set off for the West Indies and bought a rubber plantation, fell in love, had a kid, and then moved to California with his wife.

His kid, John Jr., grew up loving to surf just like his dad, and they started a surf shop in town around the early 1920s. 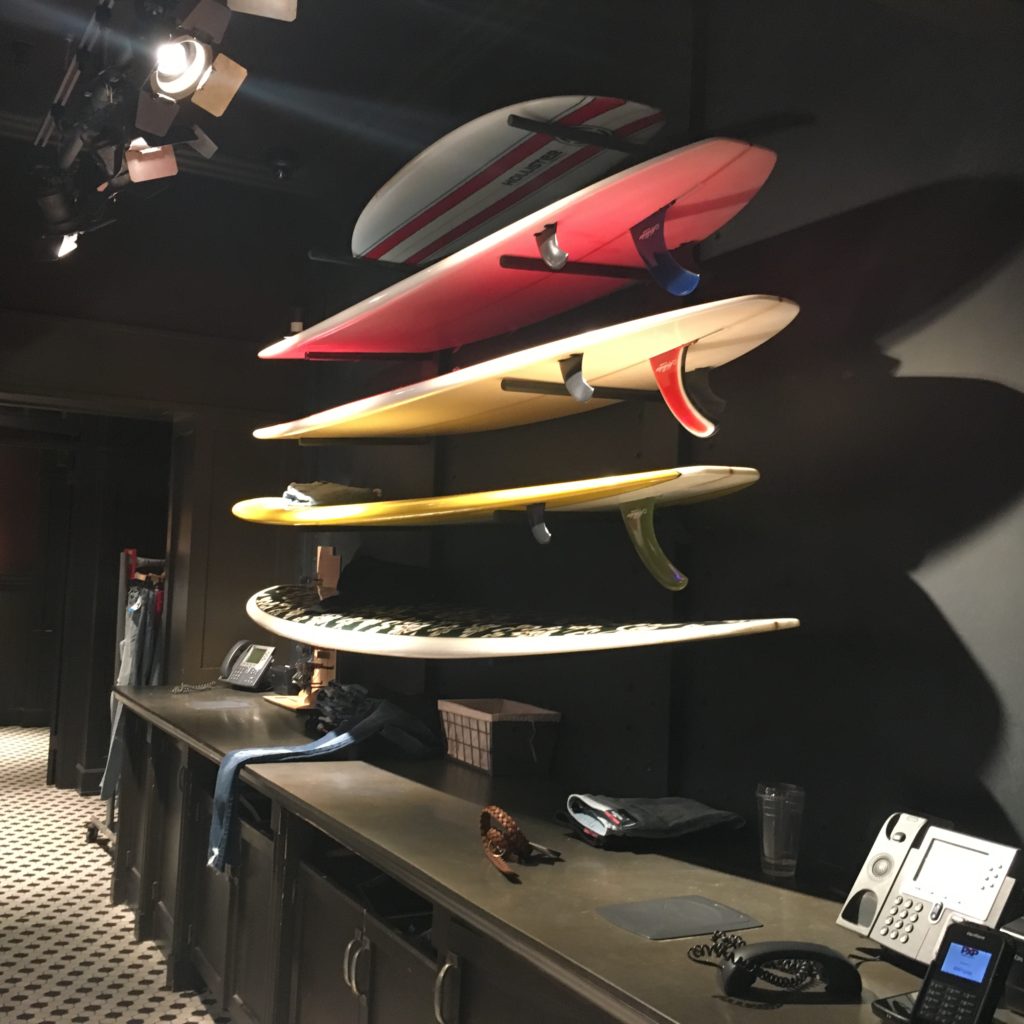 The really funny part is that Hollister has no about page with any type of founding story information on their website and they do not advertise any of this online in any official form.

BUT, here’s the kicker.

Their shirts, coats and other apparel items are branded with the year 1922, as if that was the year John Hollister started his surf shop in Cali.

So they made up a fake history and then half-committed to it, but still print the year 1922 on their shirts.

Huh. Let me know your thoughts about this in the comments below.

It was started by the Abercrombie company in 2000 to offer a similar clothing style with slightly more laid back surfer vibes but at a lower cost than the original Abercrombie store.

Today it has grown to over 540 stores and collects feedback via the tellhco.com survey where it offers loyal customers a coupon in exchange for taking the survey. 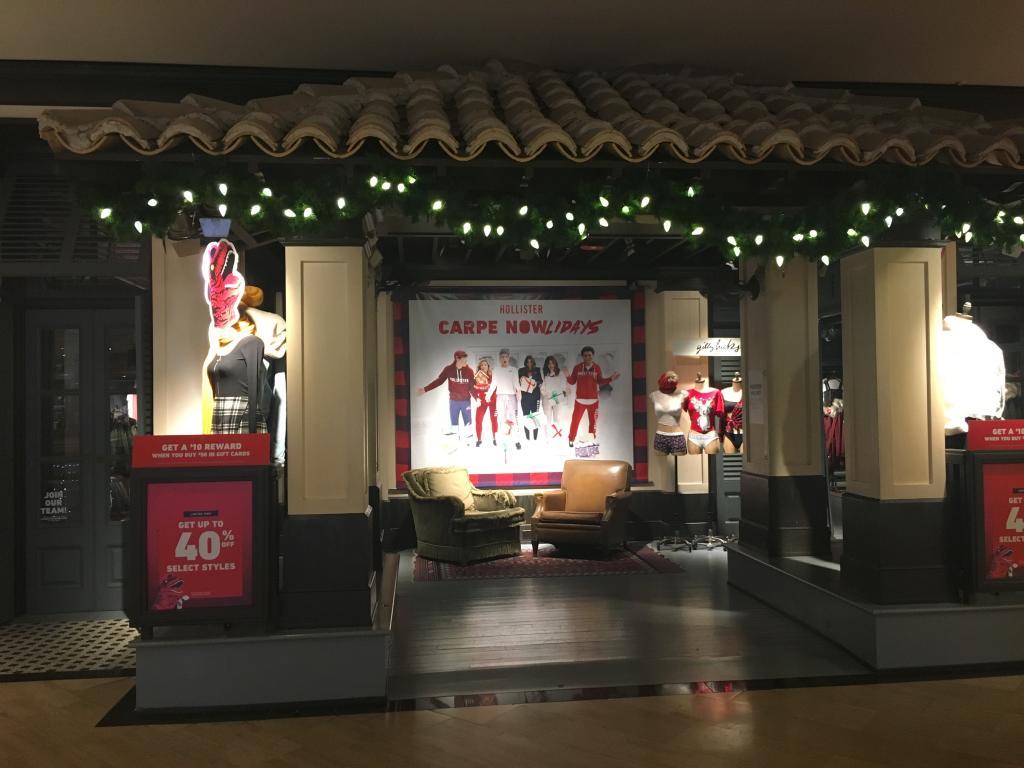 Similar to Hollister, its parent store Abercrombie also has a survey where you can get a $10 off $50 coupon. You can take the Abercrombie survey at www.tellanf.com.

Keep reading to find out how to take the Hollister survey and get your own discount code. 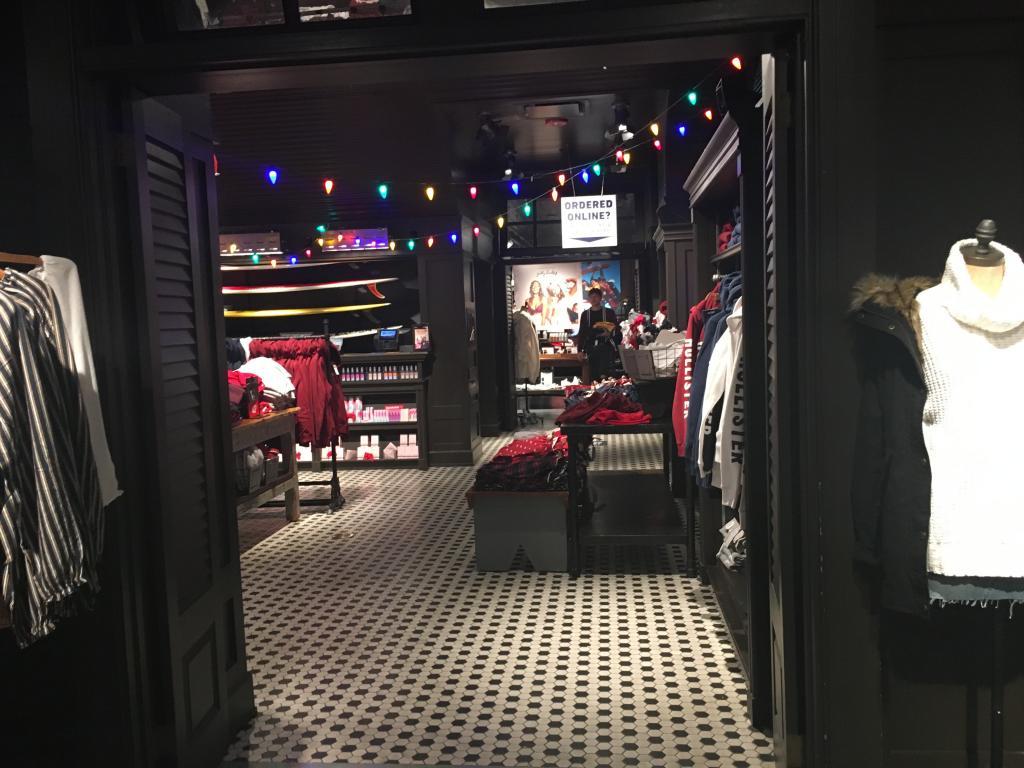 You’ll receive a coupon for $10 off your next $50 or more purchase at a Hollister location after completing the survey.

The tellhco survey homepage is tan and blue and asks you to select your language, either English or Spanish to continue to take the survey: 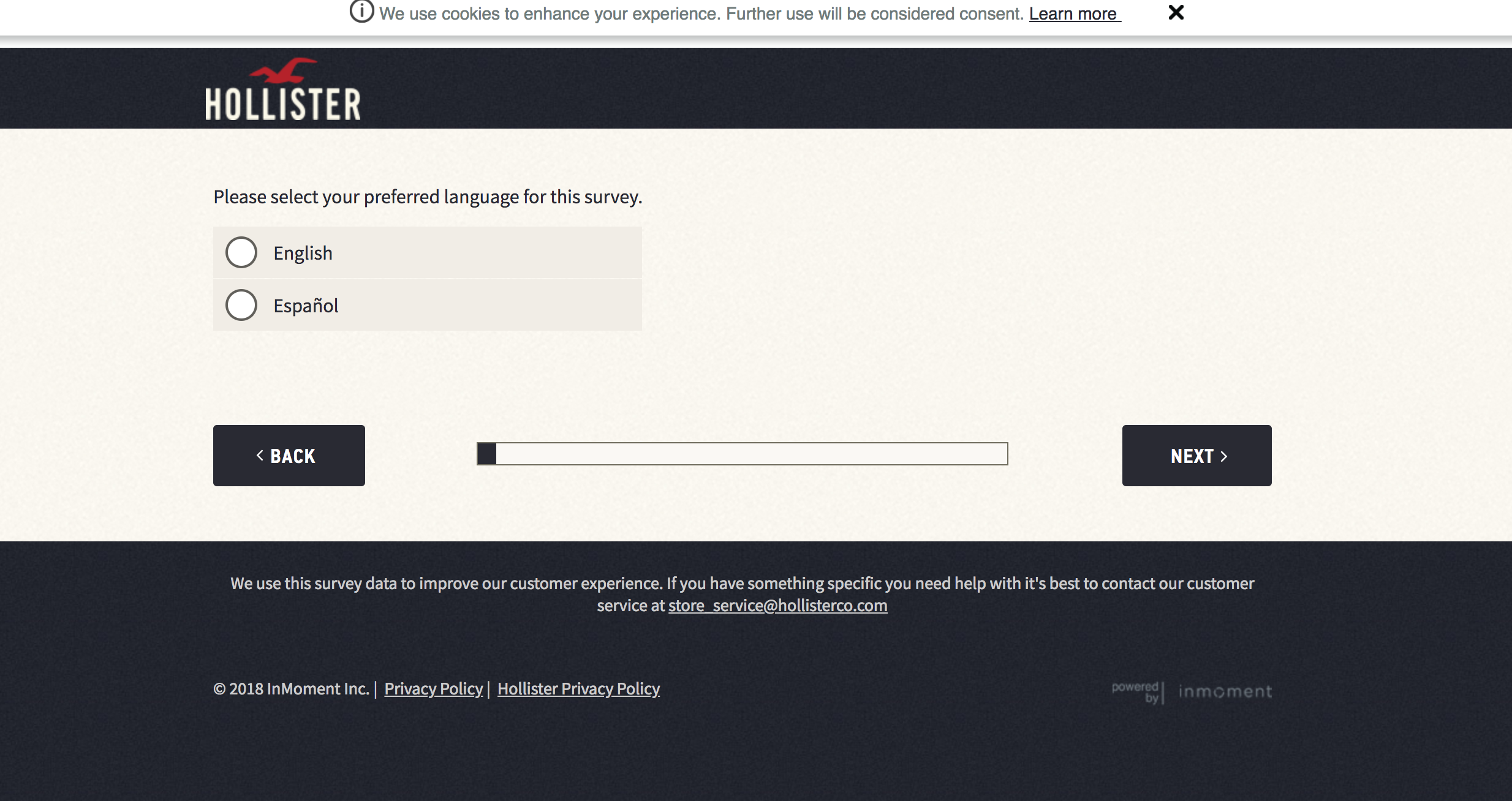 Don’t confuse the Hollister Feedback page with the survey page. The feedback page is a plain survey monkey form that lists all 10 questions on the same page. 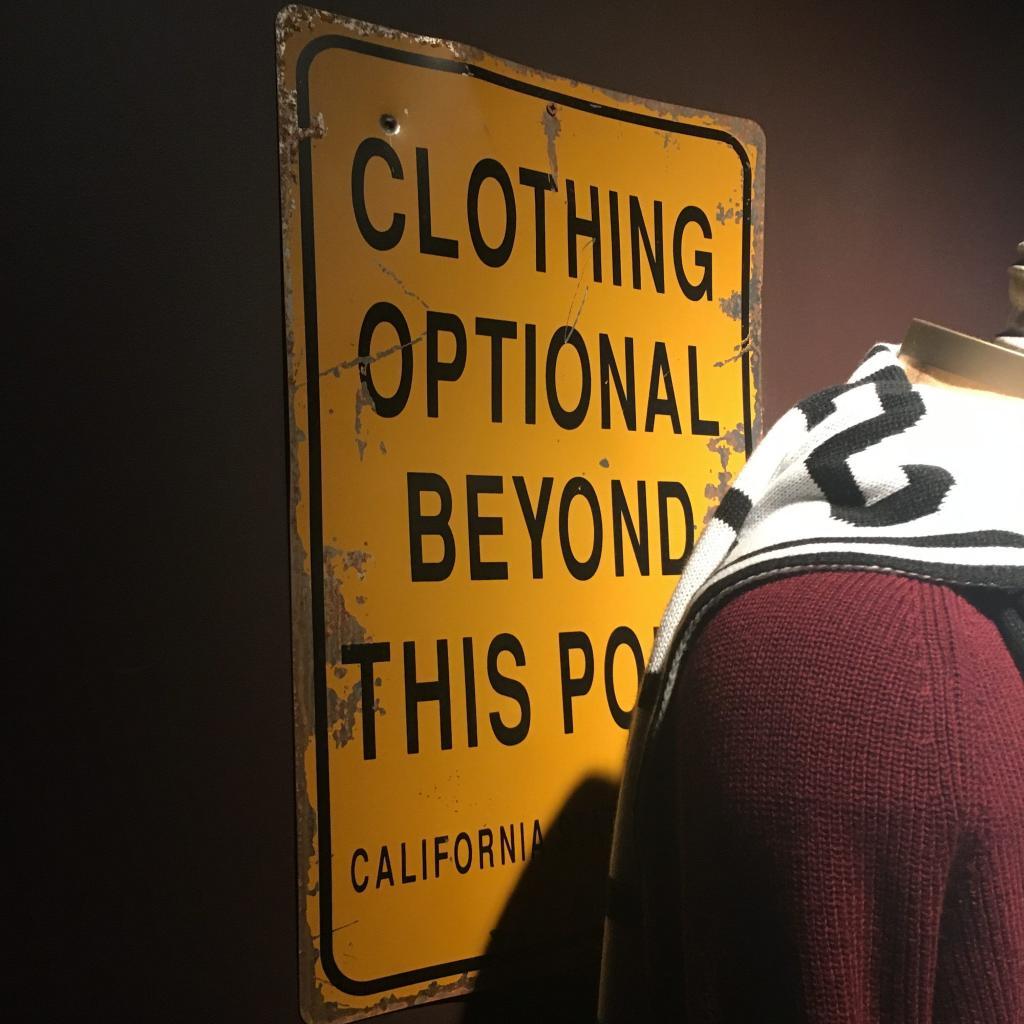 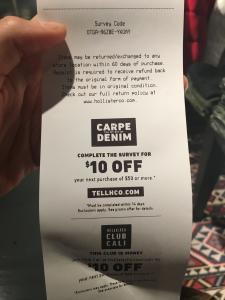